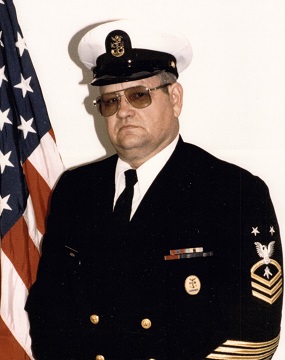 Charles Eugene “Gene” Usery, 86 of Carmi, IL passed away at 12:28 a.m. on Saturday, April 23, 2022, in Transcendent Healthcare of Owensville, IN. Gene was born on August 31, 1935, in Carmi, IL, the son of Daniel Elijah and Violet Aretha (Slocumb) Usery. He married Marilyn Joyce Hansman on June 11, 1955, and together they shared over 60 years of marriage before her passing on October 19, 2015. Gene proudly served his country in the United States Navy Reserve Seabees retiring in 1989 after 35 years at the rank of Command Master Chief Construction (E9), He was the founder of Usery Construction in Carmi. Gene served his community as a member of the Carmi Fire Department for 64 years and as a Republican Precinct Committeeman in White County for over 45 years. He was a very passionate outdoorsman who greatly enjoyed hunting and fishing.     Survivors include, his children, Cindy (Dave) Winkleman of Cynthiana, IN and Kenny Usery of Carmi, IL; two grandchildren, Bryan (Brittany) Ramsey of Norris City, IL and Ashley (Chad) Bingman of Breese, IL; three great-grandchildren, Averie Catlin, Stryder Ramsey and Rylan Ramsey, sisters, Linda Murry and Jonra (Max) Melton of Fort Gibson, OK, and a brother, Jim (Pat) Fishback of Carmi, IL. In addition to his wife, Gene was preceded in death by his parents, siblings, Danny Usery, John Fishback and Danetta Newman, a granddaughter, Heather Ramsey and a daughter-in-law, Rhonda Usery.     Funeral services for Charles Eugene “Gene” Usery, will be held at 11:00 a.m. on Wednesday, April 27, 2022, at Campbell Funeral Home in Carmi, IL. Burial with full military honors by the Carmi American Legion and VFW will immediately follow at Melrose Cemetery. Friends and family may visit on Tuesday, April 26, 2022, from 5:00 p.m. until 8:00 p.m. at Campbell Funeral Home. Memorial Contributions in Gene’s memory may be made to the Carmi Fire Department and will be accepted at Campbell Funeral Home who is in charge of arrangements.