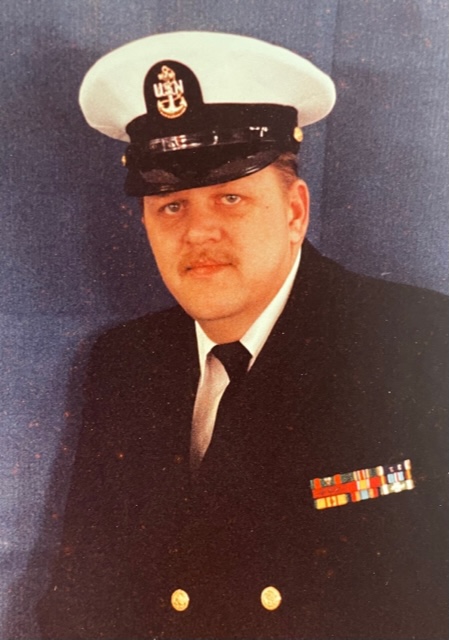 Charles E. "Gene" Young, 79, of Carmi passed away on Saturday, April 9, 2022 at Hamilton Memorial Hospital in McLeansboro, IL.  He was born in Carmi, IL on February 8, 1943 the son of George Edward and Estella (Dunham) Young.  Gene married Shelby Young in 1982 and she preceded him in death in 2000. Gene faithfully served his country joining the United States Navy. After 22 years of service, Gene retired as a Senior Chief Electronics Tech.  He went on to work for BAE Systems in Maryland before retiring after 16 years.  Gene returned to Carmi in 2004 and became active in the Carmi American Legion and VFW where he served as Post Commander at both organizations as well as serving on the Military Full Honors Detail.  He was a member of Emmanuel United Methodist Church in Carmi.     Gene is survived by two step-daughters, Tina Felitsky of Maryland and Dawn Moore of Florida; several step-grandchildren and great-grandchildren, including Meagan Bowers who he helped raise; a nephew Mike (Jeanie) Young of Carmi; a niece Diana Donahoo of Centralia; and several nieces, nephews and great nieces and nephews. He was preceded in death by his parents, a sister, Margaret Young and a brother, Edward Young.    Funeral services for Charles E. "Gene" Young, 79, of Carmi will be held at 12:00 p.m., Friday, April 15, 2022 at Stendeback Funeral Home in Carmi.  Burial with full military honors by the Carmi American Legion and VFW will be in Maple Ridge Cemetery in Carmi.  Visitation will be held on Friday, April 15, 2022 from 10:00 a.m. until service time at noon at Stendeback Funeral Home.  In lieu of flowers, memorial contributions may be made in Gene's memory to the Carmi American Legion or Carmi VFW and will be accepted at Stendeback Funeral Home in Carmi.