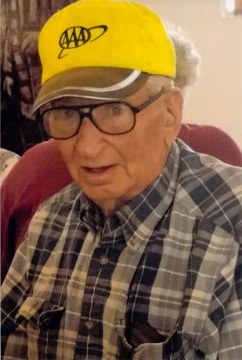 Carroll D. Hoskins, better known as "D", 94, of Norris City, passed away on Wednesday, October 6, 2022, at Deaconess Gateway Hospital in Newburgh, Indiana. He was born on July 26,1928, the son of Jacob P. and Bertie (Reeves) Hoskins.  He married Dorothy June Black on July 24, 1951, and she survives. D proudly served his country in the United States Army.  He owned and operated Hoskins Garage for 47 years. He was a member of the Elks and the American Legion.  D enjoyed working on mowers and vehicles, mowing yards and most of all, helping people.     In addition to his wife, Dorothy Hoskins, D is survived by his children, Carol (James) Fort of Frankton, IN, and David (Carolyn) Hoskins of Norris City, IL; two grandchildren, Jacob Michael (Aimee) Knight of Penacook, NH, and Caleb Seth Knight of Indianapolis, IN; a brother, Eddie (Fran) Hoskins of Norris City, IL; a sister-in-law, Donna Stephens of Columbus, OH; and numerous nieces and nephews.  He is preceded in death by his parents; and sibilings, Frances Hamblin, Lowell  "Tooter" Hoskins, Howard Hoskins, and Bob Hoskins.   Funeral services for D Hoskins will be held at 10:00 a.m. on Tuesday, October 11, 2022, at Campbell Funeral Home in Norris City, with burial at Powell Cemetery in Norris City.  Family and friends may visit from 5:00 p.m. unitl 8:00 p.m. on Monday, October 10. 2022. at  Campbell Funeral Home in Norris City.  In lieu of flowers, contributions can be made in D's memory to the Baptist Children's Home and will be accepted at Campbell Funeral Home in Norris City, who is in charge of arrangements.