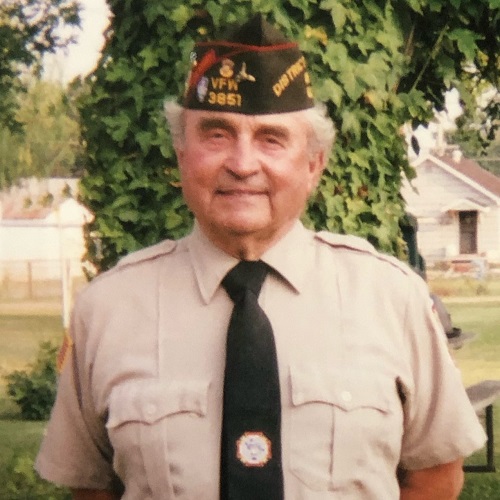 Byrom F. Ward, 93, of Calvin, Illinois, died Monday, January 16, 2023, at Deaconess Gateway Hospital in Newburgh, Indiana. He was born August 12, 1929, in Gray Township, White County, Illinois, the son of Byrom Frederick Ward and Frankie Stella (Robinson) Ward. He was married to Marjorie Ella (Payne) Ward for 51 years, and she preceded him in death on July 29, 2022.

Byrom was a farmer, but also worked in the oil fields of the Illinois Basin as an electrician and welder and he taught welding at Frontier Community College. He was a patriot and served in the United States Army 101st Airborne in Germany during the Korean War. Byrom was a lifetime member of several organizations including Veterans of Foreign Wars (13th District Commander), American Legion (24th District Commander), Masonic Lodge, and Benevolent and Protective Order of Elks. Throughout the years, he participated in hundreds of military graveside honor ceremonies. Other memberships include the Moose Lodge, and Shriners. He also served Gray Township as a Trustee and as Township Supervisor.

He is preceded in death by his parents; wife; brother Jack Ward; sisters Marguerite Bond and Martha Rector.