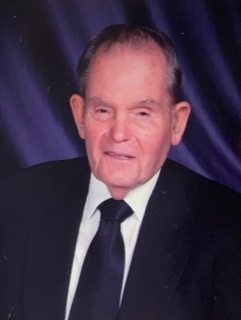 Billy "Bill" Gene Aker, 86, of Carmi, passed away on Monday, October 18, 2021.  He was born on April 18, 1935, in Henderson, Texas. He was the son of Fred and Gertie (Melling) Aker.  In 1940 his family moved to Grayville, Illinois with the oil field. Bill graduated from Grayville High School in 1953. After graduating, he went to work with his father and brother in the family business.  After a few years, Bill went to work for Snyder Drilling and Well Service.  Afterwards, he went on to work for Grayville Casing and Pulling Company.  He joined the United States Army in Carmi where he met the love of his life, Mildred Dauby at the Carmi Bowling Alley.  In 1962, they were married at St. Patrick Catholic Church in Enfield.  They lived in Carmi and attended St. Polycarp Church. In 1964 he started his career with F. W. Means  over the road route salesman, a career he continued for 32 years until retiring in 1996. The next 11 years he drove various cars from dealerships throughout the midwest for Expressway Auto World, in Mt. Vernon, Indiana. Bill was a member of St. Polycarp Knights of Columbus and the Carmi Lions Club. He enjoyed visiting friends at McDonalds, and going on cruises. Bill also visited every state in the United States. He loved visiting with Carla and Jerry at their home out on the farm west of Enfield.

Bill is survived by his wife Mildred Aker of Carmi, IL.; a daughter, Carla and her husband Jerry McCormick of Enfield, IL; several nieces, nephews and cousins.  He is preceded in death by his parents, Fred and Gertie Aker; two brothers, Wesley and Bob Aker; three sisters, Helen Kelsey, Margaret Barnett and Frances Woodham; and a premature baby daughter who passed away at birth.